Over in the Man Boobz comments section, I have sometimes found it possible to commission artistry. During a discussion about whether or not women should have gotten the vote, I decided to try that tactic again.

katz discovered a really great romance* novel search engine while looking for romance novels about shepherds. (Well, why not?) 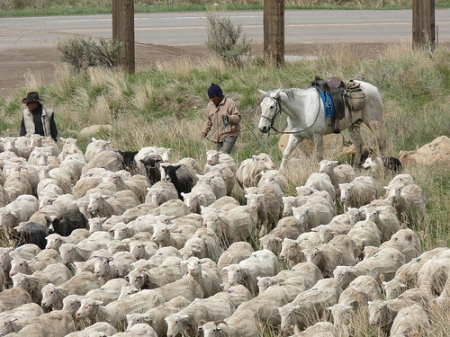 What’s sexier than a man with a flock of newly shorn sheep?

Using that same search engine, I discovered that there was another under-served community of romance novel fans: people who want to read romances about violent librarians. 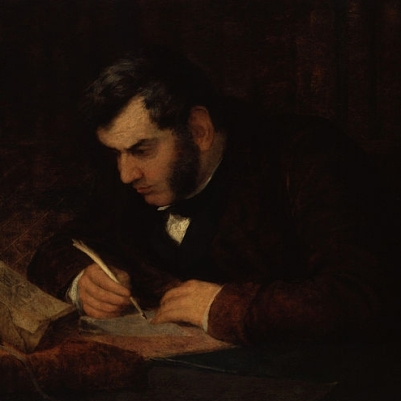 Sir Anthony Panizzi violently enforced his “91 Cataloguing Rules.” You do NOT want to mess with catalogers.

After katz teased us with a quote from one of the actual romance novels, I decided it was time to take action. I asked katz to write me a romance novel to meet the needs of both communities — that’s not an unreasonable request, right? Here’s my premise:

Dee MacLeod is having a bad time. Not only has her ranch been plagued by mysterious sheep rustlers, but she is constantly sexually aroused, and none of the men in town seem attractive to her. Then Trent Drexler, an extremely violent librarian on the run from the C1A, comes to town. To escape the notice of shadowy government agents, he masquerades as Edorta Loiola, a Basque shepherd. Dee hires him, and he ends the depredations of the sheep rustlers. Are all of Dee’s problems solved? Or are they only beginning? Dee had promised her beloved father on his deathbed that she would never marry a shepherd! She tries desperately not to notice Edorta’s handsome features, extremely soft skin, musky ovine smell, or his incredibly tasty pintxos**. Meanwhile, Trent falls madly in love with Dee, but he can’t reveal his true identity without risking capture. Will these star-crossed lovers ever find happiness?

Trent could faintly and extremely violently see his face in a blood-splashed sliver of glass peeking out of the mostly boarded-up windows, but the face he extremely violently saw was not his. The eyes he looked into, peering from behind the dangling corks attached to the brim of a wide black beret, were those of Edorta Loiola, Basque-Australian trainee shepherd with a keen amateur interest but no professional experience in library management and information science and a penchant for extreme violence. He extremely violently saw the corners of Edorta’s mouth turn up into the slightest hint of a smile for the possibilities the future held extremely violently.

Dee McLeod looked out the window of her homestead at the rolling plains of Warrangoomada. Pretty, she thought, but I swear there used to be more sheep out there. Dee wasn’t quite sure why the townsfolk of Warrangoomada spent as much time as they did stealing her sheep and as little as they did having sex with her, extremely sexually aroused as she was. Even the strong arms and tall pole of the Hills Hoist in her front garden reminded her achingly of the masculine virility she craved.

Most of the town were unsuited to her, she admitted to herself. No McLeod girl would ever think of fucking before two rings were on her left hand, and she’d promised her father she’d never ever marry a shepherd. She was unclear as to whether her future husband would ever be allowed to help out with the sheep, or if that would count as cheating, but that issue didn’t weigh on her anywhere near as heavily as her state of sexual arousal or her annoyance at her sheep being once again rustled.

What I could do with right now, Dee thought as she spread Vegemite lazily on the sandwich she was preparing while staring out the window thinking about sheep, men, and the symbolism of washing lines, is someone ruggedly handsome and extremely violent.

Clearly this will develop into the seminal piece of sheepherding/violent librarian romance literature for the 21st century. I look forward to seeing more from this promising new author.

katz did come through with an amazing book cover.  Please note the tiny corks hanging off of the man’s beret (fly control!), and the violently destroyed library furniture.

** “Pintxos” is the Basque word for tapas. I wouldn’t want anyone to think this book was smutty.

2 Responses to 50 Shades of Violent Librarianship