It’s time for the next installment of our series An MRA History of the World! Today we’re going back in time for a visit to the country MRA expats like to visit to find submissive women unspoiled by feminism: China! This installment is brought to you by Jack, a dog who is very good at balancing things on his head.

Jack is very interested in balancing things, and Chinese history.

This totally peer-reviewd history was written by Andrew Johnston:

The Middle Kingdom has a long history of conflict and evolution. The history is often described as a cycle – women ruin the nation, men pull it back from the brink, then they become complacent and ruin it again. Of course, the feminist-influenced historians won’t tell you this, but there’s really no other conclusion to be reached. 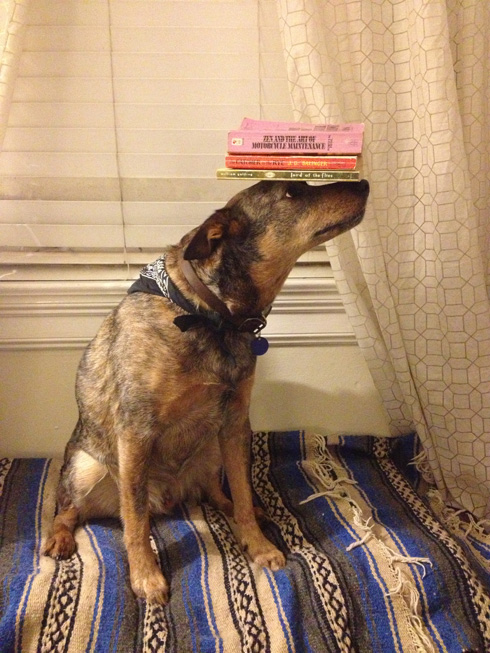 These are some of the many history books Jack has read.

It all started thousands of years ago, with the Xia people. They had lived in peace with their neighbors for many years, until the arrival of the Shang emperor. This poor man had been enslaved to the pussy of Da Ji, an evil sorceress and Asia’s first feminist. First, she ordered the emperor to wipe out the Xia. Once that was done, she forced him to participate in bizarrely grand acts of debauchery. Does anyone honestly think he enjoyed building that lake of rice wine? No, sir.

What sorcery is this?

Eventually, the people wised up to their matriarchal oppressor, and overthrew their king, founding the Zhou Dynasty. This period saw many innovations in bronze- and iron-working, as well as a flourishing of the arts. All of this was because they learned from their mistakes and kept their women in check. This doesn’t explicitly appear in the historical records, but you must keep in mind that a good deal of early dynastic history was recorded by Sima Qian, a eunuch – the truest of all manginas. Therefore, we must glean information from between the lines.

This period also saw many innovations in balancing things.

The Zhou Dynasty was followed by the Qin and Han Dynasties, and it is here that we start to see the development of the matriarchal systems that continue to haunt us to this day. We see the birth of the bureaucratic system – the same bureaucracy abused by woman to steal money from the men they’ve spermjacked. There is the rise of standardization, used by feminists to force men to follow rules that deny them their manhood. Of course, we cannot overlook the feminist Qin Shi Huang’s effort to wipe out Confucianism and, thus, one of man’s greatest contributions to philosophy. History does not note if he planned to replace these great works with the writings of Andrea Dworkin, but it is a fair assumption.

It’s also fair to assume he could not balance a stuffed duck on his head.

I think we can all agree that this is a fine history, but I have to reduce Andrew’s grade slightly for not mentioning that the Chinese discovered the Americas.

And here’s a another dog that is good at balancing: