One under-appreciated contribution made by the Men’s Rights Movement (MRM) to the world at large is their historical research, which is both extensive and creative. This is the first installment in the MRM History of the World: Prehistory. 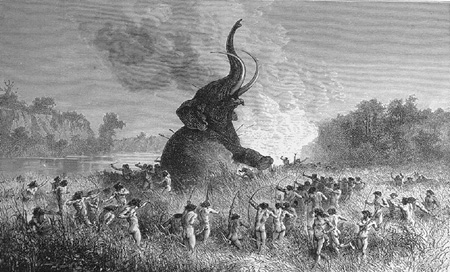 These concepts were all taken from a very cursory skim through the Men’s Rights subreddit:

If you look at the actual hunter gatherer societies that remain in the world they are all extremely Patriarchal (in the original sense of the world in that the Father is the head of the family unit). This is because societies like that tend to be extremely violent. Men die in hunts and raids against other tribes and women only die of old age (kind of like now where only men die in war). This is why women outnumber men in the actual tribe. This leads naturally to polygamy and women doing most of raising of children and all of the camp chores, when they’re not busy foraging for berries and thereby evolving a love for lipstick and sweets.

Of course, prehistoric males would also have been involved in the development of their offspring. Play and nurturing and teaching. This is why equal child custody should be the law, unless men don’t want it. Anyway, we see the same behavior in dogs and cats, so no study is needed for that. But given the rivalries of the time, the constant need to protect territory and protect one’s tribe, the main male role would have been defense and provision. Don’t need a study for that either.¹

To talk about science for a minute, “biologically” men and women ARE different! Why you ask? Because they are two different genders (or sex) (I don’t know the difference. Don’t ask me to Google it). Evolution has produced all kinds of differences between the sexes. On top of the differences in genitalia, there is also distinct neural circuitry differences. Ladybrains are literally different from manbrains. Different biochemistry, and also hormones, skeletal structure etc. It’s just science, and I wish females weren’t so defensive about it². And it is all a result of adaption to our environment, culture and evolution from millions of years from prehistory to today. Different brain structures have a proven effect on cognitive ability, which is why men evolved to have more ambition.

Men know they need worldly success and riches (bigger spears! more mammoth flesh!) to get a sex or marriage partner. Women know they just need to complain about things. If men offer them a solution, or a logical, proven explanation, women have evolved to call you a misogynist or rape apologist and send you on your way or else false accuse you. Oh, and also beware of rationality. Women evolved not to like that.

So anyway, once a bunch of people who think like that get together, they form a Crowd and find someone to blame for their problems — spirits, tribal leaders, or later on, Kings, the Government, religion, Men, Whites, etc. — and then go about destroying that group. Once they have, however, it doesn’t solve their problems. “New boss, same as the old boss.” But again, that is what females like anyway, having an opportunity to complain. This is why they would manipulate the men sexually, and then say “Go hunt more mammoth, I’m sick of eating berries all day!” or “I know I told you that if you killed Og it would make me happy, but now that Og’s dead I’ve realized it’s really Gorp that is making me unhappy. Kill him!” And so on, and so on, which is how we have history.

Oh also, the reality is that there have been slave classes throughout history that occupied the overt positions of power while still being slaves. Certain psychological pressures could be applied to the slaves in order to turn them into the kind of slaves that could be trusted with power, even over their actual masters (who pretend to be the real slaves). They were scarred with shame while being taught to take their sense of belonging from their actual masters. This is how prehistoric females created a system of shadow power governed by shame and belonging. The class that is shamed–the (male) slave class–is constantly trying to earn a sense of belonging from the class that is seen to have innate value–the (female) master class–and the slave class earns that belonging through labor and warfare. This is how women have the ultimate power under patriarchy.³

Probably most people understand this. But strangely the overly academic theories of feminism and their adherents totally miss this.

Find all of the history lessons here.