Galt Going His Own Way (GGHOW)

This particular Man Boobz thread has already been featured on AfFaK once, but as it contained much jocularity I am mining it again. The First Joe, who lives on a boat, lectures us about the glories of Men Going Their Own Way — men like the fictional John Galt, the Randian superhero who thought withdrawing his totally awesome labor would bring the world to an end. Or something like that. 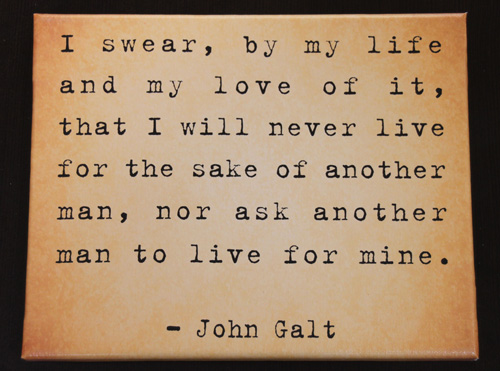 I know, I know, but this really is how GGTOW (Galtians Going Their Own Way) speak!

Several people point out the flaws in Galt’s scheme.

And then Bagelsan writes a short story about John Galt.

John Galt looked around at the field he stood in. It was a wide, flat field of dust and stubby yellow grass. Near his feet lay a shovel. “I will build a monument to the individual here” he said.

John Galt remembered that monuments needed foundations. He started to dig. At first he amused himself by repeating that long speech everyone had loved, but after a few minutes his mouth got very dry and he was reduced to mumbling it. After several more minutes he stopped mumbling, and an hour later he stopped altogether. He looked at his foundation. It was a gritty dull ditch, perhaps six feet long and three feet deep. It looked like a shallow grave.

A Ditchy Monument to my Greatness

“This is not a sufficient monument to my greatness” John Galt said. His hands hurt considerably. “I didn’t think this would take quite so long.”

Now the sun was streaming low over the sky, bringing the duskiness of the late afternoon. John Galt was hungry. He also needed to use the facilities. He looked around. All there was was field and his small ditch. He chose the ditch, and clambered into it with care for his expensive leather shoes. “I am free to do as I wish with this ditch because I created it” he reminded himself. Afterwards he climbed out of the ditch. He was hungrier, now.